PM Imran Khan invited the nation to participate in Pakistan Tehreek-e-Insaf PTI’s March 27 Rally at Islamabad’s Parade ground, calling on the people to join him in “standing in opposition to evil. ”In a recorded message, the PM began by quoting a verse from the Holy Quran.

He noted that Muslims were told to “stand for good and against evil.” courageously, in front of all people, a gang of thieves has been looting the country for 30 years conducting corruption and sending money overseas.” He stated that this “gang” had united and positioned a fee at the “conscience” of public representatives, including that these public representatives “had been being bought.”

“I want the whole nation to join me on March 27 rally to send one message: we do not condone evil. We oppose it. That we oppose crimes committed against democracy and the nation, where the conscience of the public representatives is bought with looted money.

The PM called the people to stand by the good and fight the evil and urged them to show support. He called on the people to tell the opposition that the black horse trade was “unacceptable” so that no one would dare to commit such a crime in the future. Earlier, Senator Faisal Javed Khan had written on Twitter that the Prime Minister would deliver an important message to the people of Pakistan and invite them to attend the ruling party rally of power in Islamabad on March 27.

March 27 rally power show will be held at Parade Ground.

Supreme Court order barring political parties from entering the Red Zone, the PTI changed the location of its power show scheduled for the March 27 rally in Islamabad from D-Chowk to Parade Ground. In a tweet, PTI said the Parade Ground would be appropriate to accommodate the number of people expected to participate in the rally. 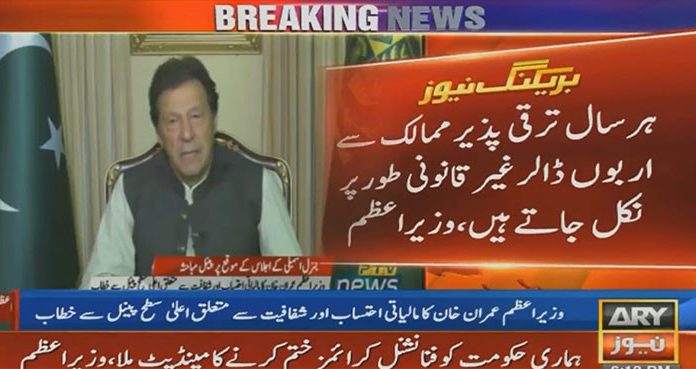 Imran Khan urged the United Nations to take steps against the illegal transfer of money globally.

PDM will be answerable for the complete lockdown in the nation because of holding...