Home Sports Cricket Captain Babar Azam Is all set for a perfect start against South...

Set up for a perfect outset:

For the first test match between Pakistan and South Africa on Tuesday, at the Karachi National Stadium,captain Babar Azam is confident and eyeing a perfect start.

In a virtual press conference before the first Pakistan-South Africa Test match, Babar Azam said “I am very confident that our week-long preparations went well.”

Pakistani Cricket Team ready to give all:

Captain Babar Azam further added that all the players are ready to give their all to give a positive result in the series-opening match. The famous right-handed batsman said that “We are all delighted to see a top-notched international team playing a full Test series on our home soil. I am sure the players will do all they can to produce a positive result.”

Comparing with the Previous match records:

If we look into the previous recent matches, the Pakistani Cricket Team had a far inferior record. Green Caps won only four matches against South Africa in the five-day format and lost 15 matches altogether.

During the interview when Babar Azam was asked about this record, he responded by saying that Pakistani Cricket Team players are focusing on the match at present and are trying to achieve victory in the opening series.

According to Babar Azam, “I believe we should not think about what has happened in the past. I know the record suggests that South Africa has a better record against us but our focus is to do well in the present.”

Babar denies the statement of Faf du Plessis statement that the Pakistani Team dependent on him and said that apart from him other players are also performing well like Azhar Ali, Mohammad Rizwan, and Fawad Alam. Everyone tries their best and contributes a lot. 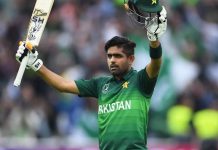